The Imperial Shag (this odd name sounds like a rude comment about the British Monarchy, but thankfully it’s not) is a species of cormorant native to the Sub-Antarctic Islands and Southern South America. They look much like penguins, but they can fly, both in the air and under water. Here you can see them sunning with Southern Sea Lions, AKA South American Sea lions on an island off the coast of Ushuaia. I much confess that I am puzzled by the Southern Sea Lions. They look nothing like the sea lions I am familiar with in California, but apparently are closely related. These Southern Sea Lions are fatter, furrier and look more like a Weddell seal. They probably need the extra fat and fur to survive in the arctic waters. They are quite handsome I think! (Click to enlarge.)

In this photo, an Albatross is flying overhead. 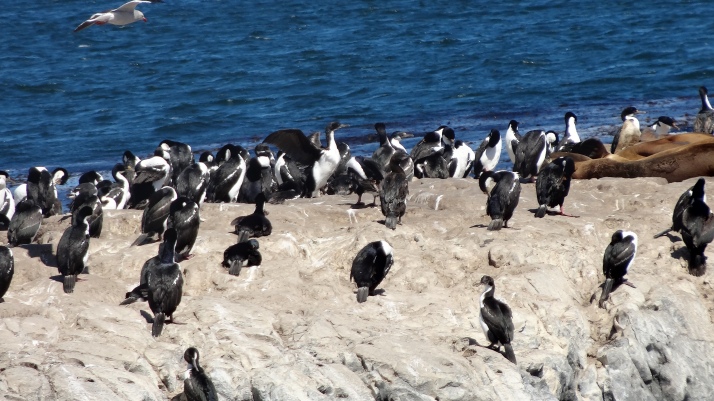 Here is a better shot of the handsome sea lions.

25 thoughts on “Imperial Shag, Southern Sea Lion & an Albatross Too!”